For hundreds of years Wrotham was the centre of the local community. Borough Green was divided into three parts on an ecclesiastical basis, with most of the village in Wrotham, some in Ightham and, after 1843, some in Platt. The coming of the railway in 1874 started the development of Borough Green which has continued ever since. In the 1870’s there were fifty houses in Borough Green, at the turn of the century there were two hundred, at the end of the Second World War, there were four hundred and by 1988 there were one thousand and three hundred houses in the village.

1870 saw the passing of Forster’s Elementary Education Act, which required the establishment of local school boards. In 1891 a further Act provided that all elementary education would be free. The 1902 Act abolished school boards and gave control to County and District Councils. The Fisher Act raised the school leaving age to 14, and the 1921 Act regulated age and conditions of work for children under this age. The Butler Act of 1944 established secondary education for all children.

Prior to 1875, children who lived in Borough Green attended school in either Ightham, Wrotham or Platt, if their parents could afford the pennies.

In 1875 Tolstoy wrote Anna Karenina, Bizet wrote Carmen, the D’Oyley Carte produced Trial by Jury and roller skating was the new craze. These facts, although unconnected with the establishment of the new infant school as described below, serve to give a chronological perspective and show how far back into history the origins of the school lie.

The local School Board engaged Robert Wheeler, an architect, to draw up plans to build on a piece of land off Quarry Hill Road, (then Thong Lane), purchased from Col. Austin of Kippington, Sevenoaks. The building was of local stone and bricks, with a tiled roof, and was lit by town gas. The builder was John Bishop.

The school opened on 5th April 1875, with Miss Emma Cull as Headmistress and Miss Anne Hutchings as her assistant. The opening roll comprised 50 children, aged from three to seven.

It had a bell tower and a balcony for the younger ones. The building was heated by two large, round combustion stoves, which were finally removed in the 1950’s.

On 28th February 1900 an adjacent piece of land was purchased to enlarge the playing area. This was paid for by the Bazaar Fund, through the sale of needlework, and grants, the sum required being £448.00.

In 1908 the Hon. Correspondent Mr W.H. Cooper wrote that the average roll was fifty. An entry in the records shows that prior to 1906, when the Church of the Good Shepherd was built, the school was used on Sundays as a church. A space of seven feet was screened off for the altar and other instruments of worship.

The transfer from the Infant School to the County Primary School, after its construction, was a key date in a child’s school history. Parents would come out to watch as the whole class marched along the High Street to start their new life at the ‘Big’ school.

Miss Jessie Church, (later to become Mrs Murphy of Falhalla, Maidstone Road), was a Pupil Teacher. In 1911 Mrs W. Hall became Headmistress and the Infant School remained on the same site until 1922, when it was moved to the existing school, now Borough Green County Primary School.

In 1909 many things happened. Louis Bleriot made the first Cross-Channel flight and the Boy Scouts were holding their first rally at the Crystal Palace.

Borough Green was expanding so rapidly that the Kent Education Committee was planning a large council school in the village. Several sites were explored and eventually a cornfield adjacent to the railway was chosen. This did not solve the immediate problem, where needs and numbers were pressing and some temporary premises had to be found.

The authorities leased a plot of land next to the Infant School and erected a substantial wooden hut in which to teach the children. This was opened as a Junior School in May 1909, with Miss Elsie Wilkes in charge, assisted by Miss Annie Hutchings. The school roll was 98 on opening, but it subsequently rose to 121. There were three rooms heated by combustion stoves, but there was no artificial lighting. A minute from a Wrotham Urban District Council meeting points out that there was no drainage to the school, although the usual offices are mentioned.

The Rev. A.P. Pascoe, curate at the Church of the Good Shepherd, was the Honorary Correspondent, with Pastor H. Bull of the Baptist Church as his deputy

The staff must have been wonderfully dedicated people to keep the school going, for the conditions were so bad that they would not be tolerated today. This did not prevent the appointment of a new Headmistress in July, Miss F. Woolmer, from a short list of seventy applicants, when Miss Jesse Church from the Infant School was also taken on as a Pupil Teacher.

‘In August the school was closed for 4 days as all the staff were ill. In November one teacher was away ill, one room heater was burnt out, and there were two classes of 80 and 40 children respectively.

In December Miss Hutchings writes that the playground was a sea of mud, the toilets were out of order, and though girls were able to use the facilities in the Infant School; no mention is made of how the boys coped with similar problems!

In the following year, a very wet winter, many children had no fit boots and the drying of clothes at the school was almost impossible. As many children had to walk at least three miles to school, this caused great hardship. There was an overflowing sewer in an adjoining property, there were complaints of bad smells from a neighbouring slaughter house, and sore throats were rife. Children and staff arriving wet into such a crowded community were obviously susceptible to all manner of infections, and mumps, measles, whooping cough and scarlet fever all took their toll. The school was, in fact, closed for six weeks because of the measles. The responsibility for head inspections lay with the Headmistress, who had to be extremely strict and exclude whole families. It was not until June 1911 that there is mention of a school nurse carrying out this task.

A local resident, of Station Road, Borough Green, who recalls Miss Woolmer quite clearly; was one of the first pupils at the school. Despite the problems described above, she remembers the school as a very happy community.

The school closed on 18th August 1911. Miss Annie Hutchings, who had taught at the school all the time, checked the stock, cleaned out the cupboards, and handed over the keys to the Head Master of the new permanent building, leaving everything in ‘apple-pie order’.

The school opened on 2nd October 1911. It was a marvellous building for its time, with lofty classrooms, large windows, a superb amenity which has served the village through two world wars, and beyond, up to the present day. It had five classrooms, two lobbies, a committee room, a large hall, and the usual offices, though all the children’s toilets were outside the building.

Mr William Hall, who had been teaching at Wrotham Church of England School, was the first Head Master, with a staff of three certificated teachers. There were 215 children on roll, aged from 7 to 14 years, with Drummond Hall, the Head Master’s son, being Number 1 on the register.

With forward planning then in its infancy, Mr Hall realised at the chalk face that initially all was not well. Insufficient staff, a lack of books, no desks nor cupboards, all served to make teaching heavy going. If the Head Master taught then the pupil/teacher ratio was 55:1, if he did not then it was 71:1. By 1st December the equipment had arrived, together with three more staff, giving a ratio of 35:1. Three months later the roll had increased to 292, and the hall had to be used as a classroom.

In 1913 three more rooms were added. Woodwork and cookery were taught in the buildings next to the present day swimming pool. These two facilities were used over the years by pupils from Wrotham, Ightham, Plaxtol, Shipbourne, Kemsing and Stansted.

Mr Hall was a keen swimmer and instigated a scheme whereby scholars would learn to swim. He rented a large open-air pool in a claypit, fed by springs. The rental was subsequently paid for by the Kent Education Committee. He planned and had built a large, slotted cradle, 50 feet by 20 feet, and 2 feet 9 inches deep. It was fixed to piles, with a landing stage to the bank. Scholars were taught to swim, and when proficient were allowed into the deeper parts of the pool. There was a spring diving board, a large raft, a boat and a water polo pitch. The pool was used from 1912 to 1942. Aquatic sports were held annually and were attended by many parents and visitors.

In 1922 a new cradle was built, with the help of Messrs Curtis and Caine, now F.P. Caine Ltd. Swimming commenced early in May each year, though for seniors only, until the pool warmed up in June. Swimming was a part of the school timetable. Changing rooms were provided in corrugated iron sheds, and as time went on, the pool became more popular, with stewards superintending, and season tickets for out-of-school swimming.

The pool’s owners, at the onset of the Second World War, put some restrictions on the hours the pool could be used. Mr McGill, the new Head Master, did not have the same dedication to swimming as Mr Hall, and the pool was closed for school use in 1942. 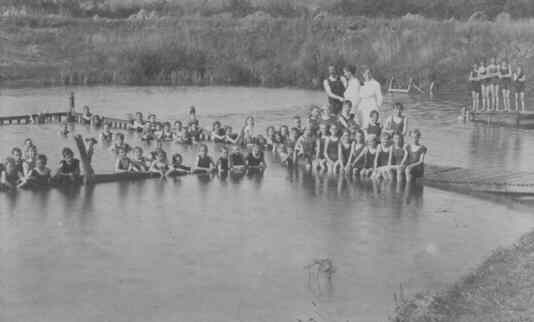 Leave a Reply on a relevant page Cancel reply